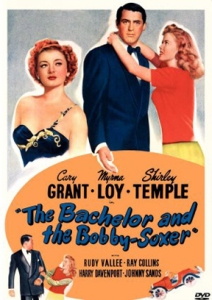 This was a movie that I found on my mum’s shelf. I thought, “Huh… I don’t think I’ve seen a Shirley Temple movie where she is a teenager.” So I naturally borrowed it. Plus, it has Cary Grant in it and if I am ever going to see his complete filmography, I have to see The Bachelor and the Bobby-Soxer.

This film would never fly today. Unless it was about a man’s life being ruined after being falsely accused of statutory rape and well, those films are a dime a dozen.

In this picture, we have the handsome adult artist played by Grant. It is established immediately that women will fight over his attention.

While giving a lecture on art at a high school, he unintentionally mesmerizes a 17 year-old Shirley Temple. Temple then treats her high school boyfriend like crap and obsesses over the much older Grant. At one point, she breaks into his house, where he discovers her waiting just as her older sister, a judge, is pounding on his door.

Nothing happens, Grant is an innocent man with a cute teen crushing on him. Grant goes to jail but things sort themselves out without Grant going into some database and having a sign in his front yard forever declaring him a kiddie diddling pervert.

The rest of the film deals with the two sisters fighting over Grant. Eventually, Temple moves on and learns to appreciate her high school boyfriend while the older sister and Grant find their “happily ever after” ending.

The Bachelor and the Bobby-Soxer was cute and enjoyable enough but it wasn’t a great picture. The acting was pretty good but the direction and the cinematography were pretty basic and straightforward. It really wasn’t that interesting of a picture.

Maybe it played better in the 1940s for teen audiences who were able to see Cary Grant through the eyes of Shirley Temple’s character. It is hard for me to say, though, as I am not a teen girl in the 1940s.