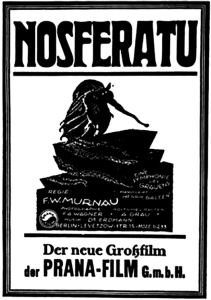 F. W. Murnau was one of the greatest directors of his day and not just in Germany. Several of his pictures were huge successes but none are probably as widely known internationally as Nosferatu.

Coming out during the height of German Expressionist film movement and the silent film era, Nosferatu could very well be the most famous silent picture ever made. It is definitely the biggest horror film of its time and seems to have the biggest lasting impact.

Similar to The Cabinet of Dr. Caligari, which predates it by two years, Nosferatu utilized the surreal and dream-like German style. While Caligari is the more surreal of the two, Nosferatu is quite a bit grittier and scarier, overall. While fitting the German Expressionist style, Nosferatu feels more realistic, as it is less stylized than its predecessor. Where Caligari felt like a case of vertigo, Nosferatu delved into the surreal but not in a sense where it feels like a horrific acid trip.

Nosferatu is actually the Dracula story by Bram Stoker. It made some alterations to the characters and some of the events but if you are familiar with the literary version of Dracula, it is quite obvious that this is an adaptation of that iconic novel. The reason that this wasn’t just made to be a direct adaptation of Dracula is due to the filmmakers not being able to secure the rights to the book. Therefore, they changed some things. But this wasn’t without consequence, as the studio had to declare bankruptcy in an effort to dodge a copyright infringement lawsuit from Bram Stoker’s widow. Nosferatu ended up being the only film produced by Prana Film because of this.

Max Schreck, who plays Count Orlok, is one of the best known vampires to ever grace a movie screen. His recognition is well-deserved. He was eerie, sinister and unlike the literary Dracula, he didn’t fit in with society. Schreck was feral and more like a wild animal that couldn’t control his urges. He created some of the most well-known scenes in the silent era and in the long history of horror cinema. To this day, those scenes are still really effective. Schreck’s Count Orlok is one of the greatest interpretations of the Dracula character and one of the greatest horror performances ever filmed. His legacy has transcended film even, as his likeness has been used in several mediums: other films, literature and video games just to name a few. Heck, he even appears in an episode of SpongeBob SquarePants.

Nosferatu was and still is a highly influential work of art. It has inspired countless directors across the globe, Count Orlok is still one of the most iconic monsters in movie history and scenes from the film are still widely used in other bodies of work.