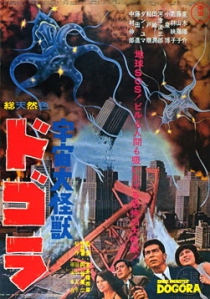 Dogora is a fairly unique kaiju movie. It is actually more of a crime film that has really weird alien occurrences throughout.

The giant creature of this film is a humongous alien jelly fish. It reaches down from the heavens like a spectre from space and tears apart the structures on Earth below.

The aliens also come in the form of these floating blue blobs that are in search of diamonds. This crosses over with the big crime element of the film, where diamond thief gangsters find themselves in the clutches of this alien force.

The special effects in this film are top notch, especially since it is a Toho picture and it didn’t utilize the talents of Eiji Tsuburaya. He was probably in the process of creating his studio Tsuburaya Productions and the Ultraman franchise, at this point.

Like many of the great Toho kaiju flicks, this one is directed by kaiju maestro Ishirō Honda. It also features a stunning score from Honda’s favorite musical collaborator Akira Ifukube.

Toho regular, the beautiful Akiko Wakabayashi is featured in this as the female gangster and lookout. While I absolutely loved her in Ghidorah, the Three Headed Monster, King Kong vs. Godzilla and the Bond film You Only Live Twice, this is my favorite role of hers. It was cool seeing her as a character with a real edge. She was also incredibly alluring.

Dogora is a really fun film. It is one of those lesser-known Toho productions that I never got to see until recently. While I like the lesser-known Space Amoeba and The Mysterians more, this picture fits in well with those.

The monster effects were cool, the atmosphere of the film was fantastic and the cast and crew did a great job in creating a fresh scenario for a kaiju movie.