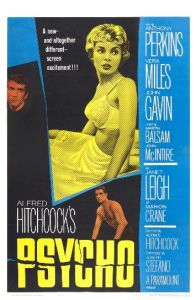 I’m a pretty big Alfred Hitchcock fan but it has been quite some time since I have watched Psycho. As a teenager, I watched it a lot, along with many of his other classics. Revisiting it now, I think I have grown to appreciate it even more.

Psycho is a masterpiece of suspense, maybe even more so than Hitchcock’s other work. Suspense is what he was known for, other than being an incredible artist. With Psycho, the suspense just builds and builds until that climactic moment and the big reveal. Even then, it delves even further as things are further explained and the real backstory is uncovered.

Alfred Hitchcock was absolutely meticulous in the creation of this motion picture. Every shot is damn near perfection, the editing is astounding, the sound is pristine, the music is magnificent and the acting is superb.

Every single scene that features Anthony Perkins is a delight. The scene where Perkin’s Norman Bates talks to Janet Leigh’s Marion Crane is a playful and unsettling back-and-forth that most other filmmakers will never come close to eclipsing. The conversation between Bates and the inspector, played by Martin Balsam, is equally as good even though it has a completely different dynamic. Watching it now, even though I have seen it dozens of times, makes me feel like Anthony Perkins was grossly underutilized throughout his long acting career.

The rest of the cast was spectacular too. And frankly, I’m not sure how anyone other than Janet Leigh wasn’t nominated for an Academy Award. The fact that Perkins or Miles weren’t nominated is baffling to me. At least Hitchcock was nominated as director, but he didn’t win. Alfred Hitchcock not receiving the respect of the Academy was something that plagued him his entire career.

It is quite possible that Psycho was ahead of its time. Before the film, there were very few great horror pictures. Horror has always been considered a lowbrow genre of film, maybe even more so in 1960 when studios were opposed to Hitchcock even making this picture. However, he bucked the trend and created a scary movie that became legendary. He also paved the way for other filmmakers with real talent to try their hand at horror.

Psycho is one of the greatest movies ever made. It deserves its later accolades and it certainly deserves the accolades that it didn’t get at the time it was released. It is better than the film of the year, The Apartment. And honestly, I really like The Apartment.