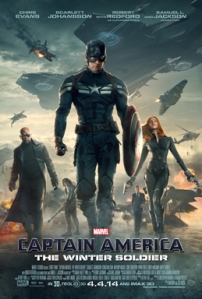 It took me some time to get to the theater to see this due to my ridiculous schedule lately but I finally got around to it, just in time to drop a review about 3 weeks too late. But whatever, here it goes.

Captain America: The Winter Soldier is unlike any other Marvel film before it. Granted, they all fit different subgenres other than just being straightforward comic book movies but this chapter in the ongoing Avengers cinematic saga was something refreshing and quite spectacular.

Instead of a cookie cutter over the top blockbuster ass kicker film, we got more of a political thriller, a conspiracy movie and a great espionage flick rolled into one big cornucopia of awesomeness with a handful of action sequences that didn’t feel overdone or made just for the sake of trying to placate to those soulless tentpole fanboys who worship the Michael Bay style of filmmaking. In fact, the film was so engaging that when action sequences started, it was like, “Oh yeah, I’m watching a comic book movie!”

Now this wasn’t a flawless film by any means but despite that, I thought it was the best Marvel film in the Avengers series. It had the best story that the studio has given us so far and it took chances that the other films haven’t. Chris Evans was great, as were Sam Jackson, Sebastian Stan, Anthony Mackie, Cobie Smulders and Robert Redford. Then there was Scarlett Johansson, I always love Scarlett Johansson.

Captain America: The Winter Soldier was not just a worthwhile comic book movie, in an era where they are becoming way too common, mundane and redundant, but it may be the best film in that genre since 2008’s The Dark Knight. On IMDB it currently sits with a rating of 8.2; I say that it is a well earned rating and I don’t disagree with it.

*2016 Update: It is infinitely better than its sequel Captain America: Civil War.