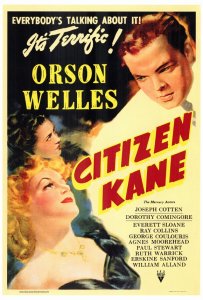 Citizen Kane is considered, by many, to be the greatest film ever made. I wouldn’t consider it the best but it is certainly an amazing motion picture, nonetheless.

I guess the most incredible thing is that Orson Welles directed, co-wrote and starred in the picture at the age of twenty-five. It is uncanny that someone so young would have such a grasp on what life would be like for a man who becomes fantastically rich and unbelievably powerful and how that would drain on his soul over a lifetime.

One can’t deny that Citizen Kane is a fantastic picture, especially for its day. The story is compelling and well orchestrated. The cinematography is breathtaking to the point that some shots are still mesmerizing, even in modern times where CGI can try and wow an audience in any way imaginable. Watching the film, it is easy to see what techniques, employed by Welles and his crew, became regular approaches to filmmaking.

It is impossible to even begin to list the countless pictures that were influenced by Citizen Kane. Stylistically, it is superb. Compared to other films of the era, it isn’t hard to understand why and how this captivated audiences and critics and how it still has a grasp on the minds of young filmmakers today.

While Kane is a fictional character, the movie plays like a really well done biopic of a true historical figure. There are several famous people in politics and media that you can associate with the character to the point that the film even feels a bit prophetic. Ultimately, it is a stern warning about the human soul and how it can become corrupted by money, power and fame.

Citizen Kane is a tragedy in the best sense. It feels Shakespearean, even in its late 1800s to early 1900s setting. It could possibly be the best tragedy not written by Shakespeare. While there have certainly been pictures and stories like it, since 1941, there is only one Citizen Kane.

Welles deserves the legendary status that this film brought to him. Again, he was twenty-five years old and made a beautiful and nearly flawless work of cinematic art that people still hold in the highest regard almost 80 years later.