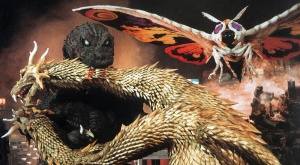 Well, since I already ranked the Godzilla films of the Shōwa and Heisei eras, I guess I need to rank the films of the Millennium era.

This was my least favorite era of the three but it still produced some good kaiju pictures. Godzilla: Final Wars doesn’t top my list as best film but it is a damn fun movie to watch, as it features probably 90 percent of the monsters from the Godzilla franchise, as well as some other Toho greats that Godzilla never got to face in his own film.

These installments were loosely related, as each one kind of ignored what they wanted to and tried to do their own thing. Watching them in succession is kind of a disjointed mess but that’s because I am someone who prefers a narrative consistency from film-to-film. It is best to look at each one of these as its own separate thing.

So here they are, ranked.