I have to break this into two parts, as there are eight films to review.

Christopher Lee was the greatest actor to ever play Dracula. In fact, he probably also has the most longevity as the character since he played him in seven films for Hammer over what spanned about two decades.

Lee has since gone on to get more notoriety in films outside of horror after playing Saruman in the Lord of the Rings and Hobbit films. He also played Count Dooku in the Star Wars prequels. But before all that, he was the king of horror and this series featured him at his most iconic and memorable.

In the first film, we get a retelling of the classic Bram Stoker tale. Some of the characters are the same but the events differ greatly.

Jonathan Harker arrives at Dracula’s castle. However, in this version, he knows who Dracula is and he is there to destroy him. Before he gets that chance, he ends up a vampire himself. This brings in Van Helsing. In this series he is played by Christopher Lee’s constant co-star and lifelong best friend, Peter Cushing.

Cushing is most famous as Grand Moff Tarkin in Star Wars Episode IV: A New Hope. So this film features two great Star Wars villains as leads. The film also features Michael Gough, who was best known in more modern times as Alfred in the Tim Burton and Joel Schumacher Batman films that were released between 1989 and 1997.

As a film, this installment is the best in the series. It is some of director Terence Fisher’s best work. It has a great pace, a great atmosphere and the cinematography was total Hammer Horror style, which would become synonymous with the studio and many other studios that tried to knock it off and mimic Hammer’s success. Granted, the style was used in The Curse of Frankenstein a year prior but Fisher’s implementation (and probably invention) of the style was really at its best in these two films.

This movie is greatly acted, greatly directed and the special effects for the late 1950s are pretty damned amazing. Taking into account the limited techniques of that era, the Dracula death scene is pretty cool to watch and I can see where at that time, it would have been awe-inspiring and cutting edge. Hell, it is way more effective than the overabundance of CGI that we get now and it also looked more realistic because what you see on screen was actually physically on the set. 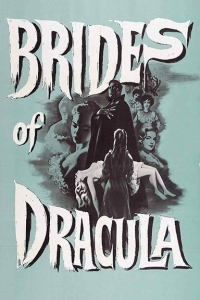 One could argue that this film should be omitted as Christopher Lee is not in it and neither is Dracula.

Peter Cushing returns however, as Van Helsing and this fleshes out his story more, which is good considering that a version of his character doesn’t return to the series until the final two films. Also, this film is directed by Terence Fisher. Regardless of those who don’t consider it part of the series, it is, at the very least, a spiritual successor to Horror of Dracula.

This film follows Baron Meinster (played by David Peel), who is a disciple of Count Dracula. The plot revolves around a girl who comes to town and tickles the Baron’s fancy. However, the Baron has an overbearing mother who literally has him chained up. He is said to be insane. The girl, Marianne, feels for the Baron and grows a bond with him. One thing leads to another, a girl winds up dead and Van Helsing, who just so happens to be in the right place at the right time, suspects vampirism.

This is a pretty good film and it is consistent with Terence Fisher’s great catalog of classic horror gems. Sure, Lee doesn’t reprise his role as Count Dracula but the story is engaging enough to keep one interested and Cushing is good enough to keep any film afloat – even some of the shittier horror films he found himself in throughout the years. This is not one of those shitty films, however.

Finally, after an eight year hiatus, Christopher Lee is back as Dracula! And he would remain so for the rest of this iconic series! Unfortunately, Peter Cushing checked out and wouldn’t return until the seventh film in the series Dracula A.D. 1972.

This is my favorite chapter in the series. I find the story to be the most engaging and interesting of all the Hammer Dracula movies. Weirdly, Dracula doesn’t even have a line of dialogue in this film other than a few grunts and noises and intense stares. Truthfully, he doesn’t need words, as his motivations are pretty clear and it actually makes him more frightening and animalistic in this movie. Christopher Lee has a way of telling a story with his eyes and body language and even without words, Dracula felt more like the apex predator that he is in this film than any other Dracula film in history.

This installment is also directed by Terence Fisher and plays like the final part of his Dracula trilogy – encompassing this film and the two before it. This would be his last movie in the series and frankly, after this film, the quality started to decline. Granted, every film was still a positive experience except for the final one.

The plot in this film deals with four Londoners who end up in the Carpathian Mountains on vacation and are warned to stay away from the evil castle on the nearby mountain. Of course, they end up in the castle and are used to resurrect Dracula. The Dracula regeneration scene is pretty spectacular.

This is also the first film in the series to feature a bad ass religious figure taking on the evil vampire lord. They needed someone to fill that Van Helsing spot in the film, so this started the trend of having religious figures combating Count Dracula. This film also uses the formula the best, as Andrew Keir’s Father Sandor was like a kick ass Santa Clause with a high-powered rifle. 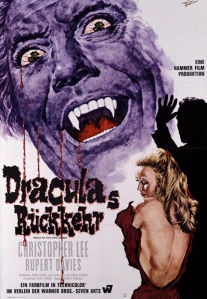 Man, I really enjoy this film too. It brings back the religious protagonist. In this film he is Monsignor Ernest Muller. He is less effective than Father Sandor in the previous chapter and is actually the catalyst that unleashes Dracula, even though he doesn’t realize it.

This film also brought in another protagonist, one who is dating the niece of the Monsignor. This character was more interesting as he was a self-professed atheist that got under the skin of the religious know-it-all. In fact, I feel like they used the dichotomy between the religious man and the non-religious man to make a commentary on the subject within the scenes of this film.

As things would go, Dracula wants the girl, the boyfriend must protect the girl and conflict ensues. While this isn’t the best in the series, the plot is fresh and the series isn’t falling victim to redundancy at this point.

Lastly, the Dracula death scene in this film is phenomenal and beautifully shot; props to the director, Freddie Francis.