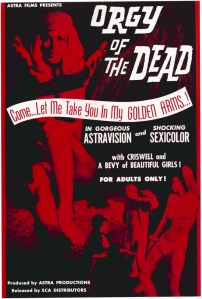 It currently holds a rating of 2.7 on IMDb. It seems a bit low to me. I mean, if you go on that just based off of the film’s overall quality, I get it. But this is a pretty special picture and unique, even though it barely has a plot. Plus, it has a certain appeal due to how bad of a film it is. But it certainly isn’t as unwatchable as a 2.7 would have you believe, which is why I think it’s a low rating.

The plot sees a horror writer and his girlfriend driving at night on a highway. They are in search of a cemetery. The writer feels that it will help inspire him to write some new monster stories. The guy drives too fast, they crash and then they awake to discover that they are caught up in some heavy supernatural shit.

Criswell, a regular Ed Wood collaborator, and Fawn Silver (as Ghoulita) are a vampire pair with a squad that includes a werewolf, a mummy and two strong men. They sit and enjoy making the spirits of dead hot chicks dance around naked – each girl having her own unique theme and story. The nudie dancing is pretty much the entire film other than where they felt they needed plot.

The film plays like a topless burlesque show with a 1960s gothic twist. Most of these girls are pretty hot, by the way. So that’s a definite plus.

It is an interesting picture to watch, if you are a film buff or a fan of Ed Wood, even though Mr. Wood didn’t direct this. It is a good midnight movie to drink to and watch with some friends. It doesn’t have much replay value unless you are showing it to other friends who haven’t experienced it or if you have it playing on the TV during a party.

The film is amusing, often times hilarious and a cute little feature. It has that Ed Wood spirit where you know that the filmmakers were taking the movie serious but everyone on the set was having a good time and didn’t really worry about the quality of things.