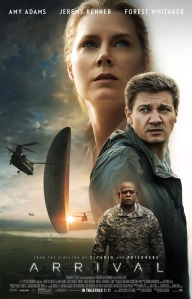 Over the last few years, there have been a lot of big science fiction films popping up around November. I’m really liking this trend, even if most of them don’t seem to be as smart as they are marketed. The thing is, as scientifically literate as Interstellar claimed to be, it was ultimately a disappointment to those of us who have ever picked up a book by Carl Sagan, Stephen Hawking or Neil deGrasse Tyson. When you expect to see a spaghettified version of Matthew McConaughey entering the black hole but instead, you get him playing around in his daughter’s closet sending time traveling Morse code to a watch in the past, it’s a pretty eye-rolling experience.

Arrival doesn’t try to dupe the audience with the illusion of a real scientific approach. It actually manages, for the most part, to come of as realistic as a film can considering the subject matter. Sure, like Interstellar, it pulls at the heartstrings, maybe a bit too much, and it brings in a time traveling element of sorts – tying every big event in the film to the main character’s personal life – but Arrival does a much better job of it.

The film stars Amy Adams, Jeremy Renner and Forest Whitaker: three heavy hitters with loads of talent that carry this film on their backs without any problems. Director Denis Villeneuve maybe had it too easy, as the cast felt completely natural with one another and acted out their roles flawlessly.

However, the picture may have benefited more, had Whitaker had a bit more screen time. His character was the thinnest and I wish he had been fleshed out to some degree, as there really wasn’t much that the audience knew about him. I guess the same could be said for Renner, to a lesser degree. Ultimately, this is Amy Adams’ film and she takes center stage. But the film is also her story and really no one else’s.

The highlight of this film is the use of linguistics. Amy Adams’ character, Dr. Louise Banks, is an expert in language and has deciphered things for the government before. This time, she is needed to figure out why alien visitors have arrived on Earth. Instead of following standard sci-fi alien invasion tropes, Arrival doesn’t serve up invaders who already speak our language or who have “studied our planet’s radio waves for years” and figured out how to send us messages. Arrival gives us an alien civilization that we have to work with in an effort to communicate with one another. That is the big story of the movie. Well, as much as I can say without spoiling too much.

The film builds up a lot of tension and it does a great job of moving forward at a good pace while keeping everything interesting and on point. However, by the time you get to the end, which features a sort of plot twist and big reveal, things feel pretty underwhelming. The build up was great but the resolution was pretty bland. There really were no big surprises in the film, even though the picture felt like it thought there were. But maybe that is because the time traveling element that I mentioned before, has already been used quite a bit in these types of serious sci-fi movies.

Ultimately, this film is still pretty fantastic, regardless of the underwhelming resolution.

The cinematography is pretty great. The alien vessel reminds me a lot of the visual style of Michael Mann’s 1983 film The Keep. The rolling fog over the Montana mountains as Louise arrives to base camp the first time is majestic. The cold dark tone of the human side of the glass versus the bright foggy alien side creates a pretty stark contrast between the two species and foreshadows what is to come.

In regards to the aliens, Arrival benefits in that it reveals them almost immediately. There is no mysterious build up over the course of two hours for a crappy reveal ala Super 8 and some other movies. The aliens are just kind of present in the film. Their look isn’t distracting and it is pretty simple and neutral. They aren’t super cool and they aren’t super lame, they just exist and it works.

I was pleasantly surprised by Arrival and was glad that when I first heard about it, that it wasn’t a reboot of that 1996 Charlie Sheen film of the same name. All of these serious sci-fi pictures, as of late, have left me pretty disappointed. Arrival did not. I would say it is the best of the lot.