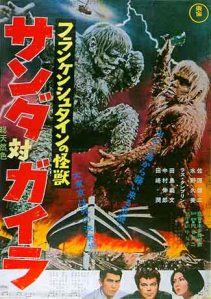 War of the Gargantuas is one of the best kaiju films that I have ever seen. It may be my favorite outside the realm of the Godzilla mythos. Hell, being that it is made by Toho, it could actually be in the Godzilla mythos. In fact, I’m surprised a gargantuan didn’t cross over into a Godzilla film. Then again, this is a sequel to Toho’s 1965 film Frankenstein Conquers the World, which saw a Frankenstein-like creature take on the kaiju Baragon, who would go on to be featured in a few Godzilla films.

In Japan, the film was called Frankenstein’s Monsters: Sanda vs. Gaira. So essentially, we have two Frankenstein’s monsters grown to gigantic proportions smashing each other and the poor cities that happen to be in their way. While they didn’t completely look like monsters created by Mary Shelley’s mad scientist, they did share some slight visual similarities. Although they were more reminiscent of burn victim Wookiees than anything else.

As a kid, I was a Godzilla snob when it came to my kaiju love and didn’t care as much about lesser franchises and non-Godzilla films. I was young, so sue me. However, the first time I saw War of the Gargantuas, late night on TBS in the 80s, my Godzilla bias washed away and I was thunderstruck with admiration for something different in the kaiju arena. Thus began my larger appreciation and exploration deeper into the genre. Without this film, I may have stuck with just Godzilla and have grown up and grown bored of these films. War of the Gargantuas expanded my palate and introduced me to variety. Maybe I am being overly nostalgic and sentimental, but without this film, I could’ve lived a life giving other great daikaiju eiga masterpieces the snub.

From a film standpoint, War of the Gargantuas has the look and vibe of your regular 1960s Toho monster movie. It doesn’t differ much in style, other than giving us two really bizarre kaiju that have a look so unique they can’t be confused with any other creatures other than each other and even then, they’re different colors and one is larger.

What sets this film apart and makes it special, is what I already alluded to. It’s the fact that it serves up something different in an era where Godzilla films were being cranked out like new Disney heartthrobs and Godzilla clones were in abundance. War of the Gargantuas isn’t a perfect film but it’s fun as hell and a step above standard mid-60s kaiju fare.